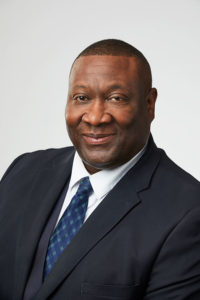 Gary Miller was born and raised in Evansville, Indiana. Following high school, Gary attended Moorhead State University on a basketball scholarship. However, after his first year at MSU, Gary felt an overwhelming desire to serve his country and joined the United States Navy in 1983.

After concluding his first enlistment, Gary re-enlisted in the Navy for another four years and decided that he wanted more of a challenge than his job as a communications specialist. As such, Gary petitioned the Chief of Naval Personnel to allow him to convert to a Paralegal in 1988. Gary’s petition was granted, and he was accepted into the paralegal program at the Naval Education and Training Center (NETC) in Newport, Rhode Island. Gary graduated from NETC in 1989 and was transferred to the Naval Legal Service Office (NLSO) in San Francisco, California for what turned out to be his last tour of duty. Gary graduated from St. Mary’s College of California in 1992 and was honorably discharged from the Navy in 1993. In 2012, Gary received his Bachelor’s degree in Paralegal Studies from Kaplan University. While attending Kaplan University, Gary made the Dean’s List on multiple occasions for academic excellence.

Gary brings more than 24 years legal experience to the Kelly Law Team. He has worked at some of Arizona’s largest consumer law firms. Along the way, Gary was able to hone and refine his legal skills. Gary is a welcomed addition to the Kelly Law Team. He has devoted the lion’s share of his legal experience to the areas of personal injury and criminal law. He is a highly skilled and exceptional paralegal with the ability to market the services of law firms and generate new business. Gary represents a new age of paralegals that “think outside of the box” by finding creative ways to make a niche in the legal community via marketing law firms and generating new business. Gary is very well known and respected in the legal, medical, and insurance communities, and the Kelly Law Team is pleased to have him as an employee.

DeShaun has quickly become an invaluable member of The Kelly Law Team! Originally from St. Croix Falls, Wisconsin, DeShaun moved to Phoenix, Arizona in February of 2017. DeShaun received her Bachelor’s in Criminal Justice from the University of Wisconsin Eau Claire in 2003. In her free time, DeShaun enjoys dance lessons, baking and watching the Green Bay Packers with her friends and family. After working in corrections for over 12 years, DeShaun was inspired to join The Kelly Law Team in their efforts to help personal injury clients through the difficulties surrounding personal injuries. DeShaun is a highly motivated and adaptive learner and she has surpassed expectations in her role as the File Clerk and Legal Assistant for the firm. The Kelly Law Team is thrilled to have DeShaun on the team!

Marcine is the Business Assistant with The Kelly Law Team.  With her strengths in understanding best business practices for law firms and pioneered ideas for better case management, Marcine supports Phoenix personal injury attorney John Kelly in his efforts of transforming the firm into a well-oiled machine.  An Arizona native, Marcine holds her Bachelor’s in Business Management and Master’s in English from Southern New Hampshire University.  Marcine spends her time away from the office collecting old books, caring for three dogs and raising her three teenagers.  After working for a larger local personal injury firm for eight years, Marcine learned the value of the personal attention that a smaller firm can provide to Arizona personal injury victims.  Marcine is an advocate for Kelly Law Team’s mission to deliver the highest quality of representation and exceptional customer service.

Stephanie was hired as the Receptionist at Kelly Law Team; however, she was quickly promoted to Legal Assistant. Originally from Western Australia, Stephanie and her husband moved to the U.S. in 2015 so she could pursue a degree in law. Stephanie spent many years traveling the globe as a figure skater and making latte art as a coffee barista. Just over three years ago, Stephanie made the transition to a legal assistant to begin her career path in becoming a lawyer. When she is away from the office, she spends her time with her husband and two beautiful dogs. Stephanie holds a degree in Business Administration from the University of Western Australia. Stephanie’s wonderful personality and dedication to helping personal injury clients has made her an instant valuable member of Kelly Law Team.

Johnny is a highly motivated paralegal who joined Kelly Law Team in the beginning of 2019. Originally from Atlixco Puebla, México, Johnny’s desire to help his community drove him toward a career as a paralegal. While he was living in California, Johnny obtained his paralegal certificate in 2005. His eleven years of experience has enabled him to become one of the top performing paralegals in the firm. When he is away from work, Johnny spends his time watching basketball games and traveling with his family. Johnny speaks English, Spanish, French, Polish and German. Johnny’s dedication to helping our clients resolve their case swiftly and accurately has allowed him to quickly become an invaluable member of the Kelly Law Team.

Elizabeth is a highly motivated Litigation Paralegal with just over five years of experience in helping personal injury victims through the litigation process to recover rightful compensation. While she was an avid swimmer in high school, Elizabeth spent her childhood traveling overseas as her father was enlisted in the Army. She completed her Bachelor of Arts in Behavioral Science from California State Polytechnic University, Pomona in 2007. After completing her education, Elizabeth joined the Unites States Peace Corps and volunteered her time in Macedonia assisting with developing human rights and social development best practices. After returning to the United States, Elizabeth earned her A.A. in Paralegal Studies from Fullerton College and she is an American Bar Association Certified Paralegal. She has always been passionate about helping people and fighting for what is right which is why she became a paralegal. In 2019, Elizabeth joined Kelly Law Team as part of the Litigation Team. The Kelly Law Team is excited to have Elizabeth on board!

Becky joined the efforts of Kelly Law Team in 2019 as the File Clerk. Originally from Honolulu, Becky considers Buckeye, Arizona her hometown. After recently completing her Associate’s in Paralegal Studies, Becky decided to apply her life motto of “Challenge Accepted” to advancing her career in the legal field. During the day, Becky spends her time in the office as a paralegal-in-training learning how to help personal injury victims throughout Arizona. When she is away from work, Becky loves to help people through the toughest times by volunteering and raising funds for various charities with the goal of bettering her community. The Kelly Law Team is elated to have Becky as our newest team member!

Hailey joined the endeavors of Kelly Law Team in October of 2019 as our new Receptionist. Hailey is a rare Arizona native, originally from Parker, Arizona, she moved up to the valley after completing high school.  She is currently working on obtaining her Associate’s in Paralegal Studies. Hailey has just over three years of clerical experience and is working toward building her in the legal field. While she was most intrigued by criminal law, Hailey is enjoying her time in the personal injury field as she likes that she is a part of a team that helps those who encounter unexpected misfortune.  During her time away from the office, Hailey spends her time tracking down scary books and movies and traveling back to her hometown to visit her family. The Kelly Law Team is delighted to have Hailey as our newest team member!